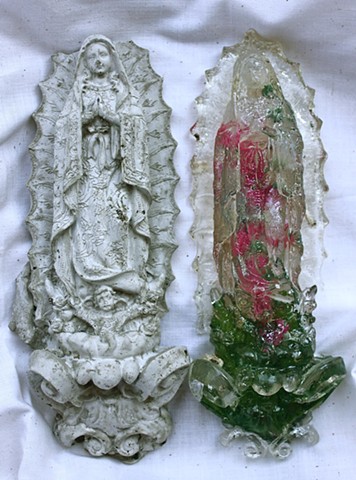 Our Lady of Fullerton: An Offering to the Disappearing Miracle
Concrete, resin, salt, silk offering flowers
< previous next >

“Back in 2005, there was a giant wave of rain that rocked Chicago leaving a mysterious water stain under the viaduct at the Fullerton exit on the Kennedy Expressway. A passerby declared that it appeared to be the Virgin Mary, setting off a media frenzy. Flocks of the faithful gathered around the stain, leaving a vast array of flowers, prayer candles, wreaths, and all manner of offerings for the blessing of the Virgin Mary.

The crowds went on for days if not weeks with many of the believers praying and kneeling with full faith that they were indeed peering at a veritable miracle. Driving past, you could see the impressive display of floral arrangements and wonder if something special really did materialize out of nowhere. Of course there were skeptics, but that did not turn away the crowds who stayed relentlessly guarding the stain.

Skeptics on the other hand, remained unconvinced that this stain was of supernatural origin and ridiculed those who stood watching the mysterious stain. With all the hubbub about the stain, city employees decided to take matters into their own hands and in a stealth operation reminiscent of the bulldozing of Miegs Field, painted over the stain of the Virgin Mary with dark brown paint. As I struggle to recall the details, there were a pair of brothers who worked on cars nearby who heard that the stain had been defiled and quickly went to work expertly removing the last of the brown paint. With the last of the paint removed and public outrage, the city decided to leave the stain alone.

Fast forward five years and you'll find that a seesaw battle has been raging on between the believers and non-believers as the stain has seen days of vandalism and restoration. Making my first visit to the shrine, I found candles still lit in the middle of an idle Tuesday afternoon. Flowers laying near the shrine were fresh and there was a garbage can and broom left next to the shrine for its anonymous custodian. There's certainly a mystic aura with all of the scribblings left behind and pictures along with the candles and flowers. It's quite remarkable and while I can't profess to say if the Virgin Mary is there or not, the stain is well worth a closer examination.

Looking up close, you'll see that paint still marks the perimeter of the stain. Around the stain is a wooden frame bearing the picture of the stain in its former unblemished state while a ledge of candles lies directly underneath. The homeless take shelter on the opposite end of the overpass, but as I approached the sleeping bags and bags of garbage I didn't see any people sleeping. It's not up to me to say whether or not the Virgin Mary can be found here or if the stain is the result of rain or some miraculous act. All I can say is that it was a neat trek to take a close look at one of Chicago's most obscure landmarks.” -yelp review, 2012